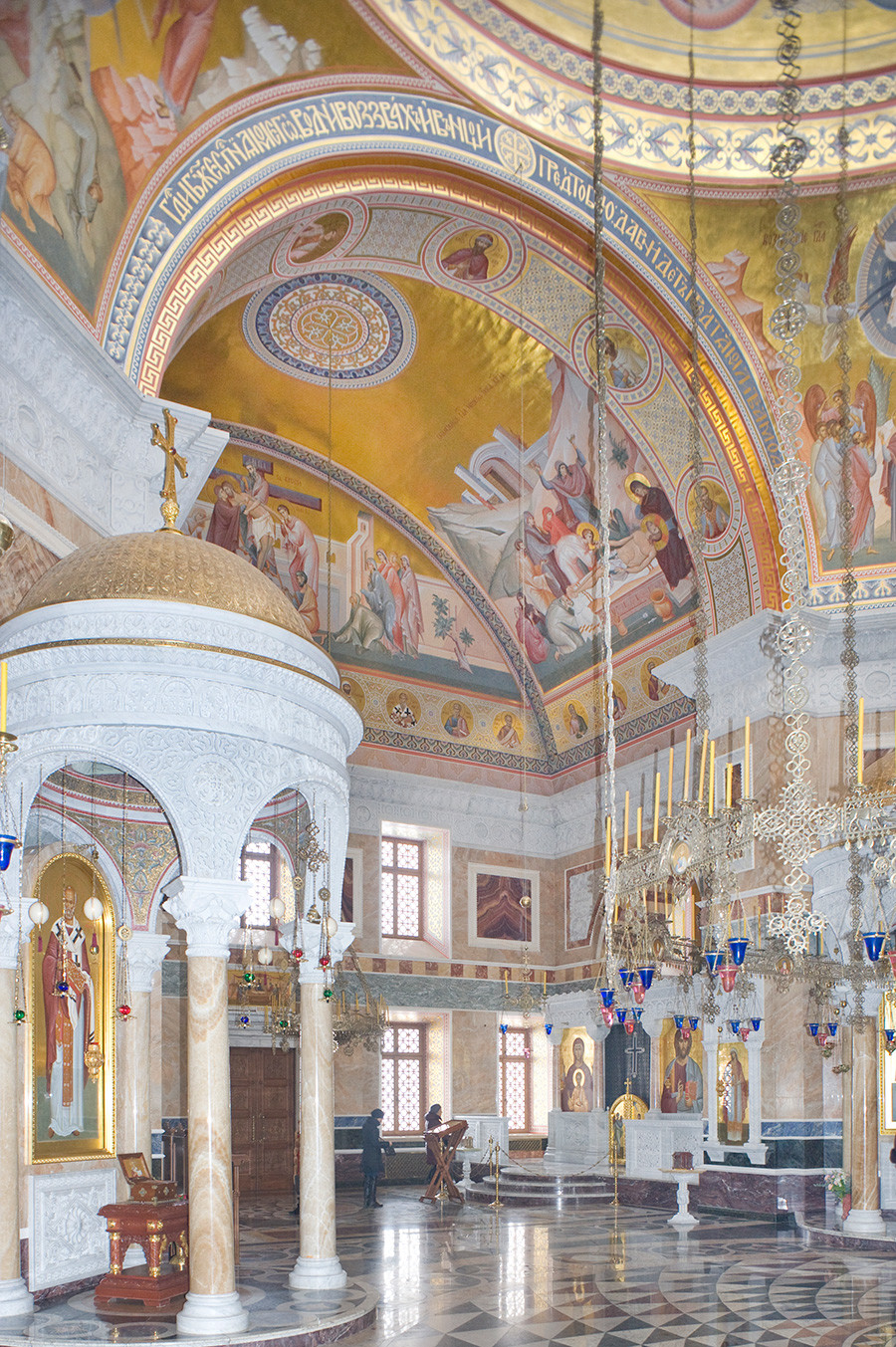 Yekaterinburg’s convents: Centers of faith in a factory town

Yekaterinburg – gateway to Siberia – is a relatively recent creation, originating in the early 1720s through Peter the Great’s quest to develop heavy industry and armaments for his expanding army. The modernization of Russian metal-working capabilities was a major part of the tsar’s ambitious industrial strategy, and the rich mineral resources of the Urals let to the creation of numerous factory settlements and towns. 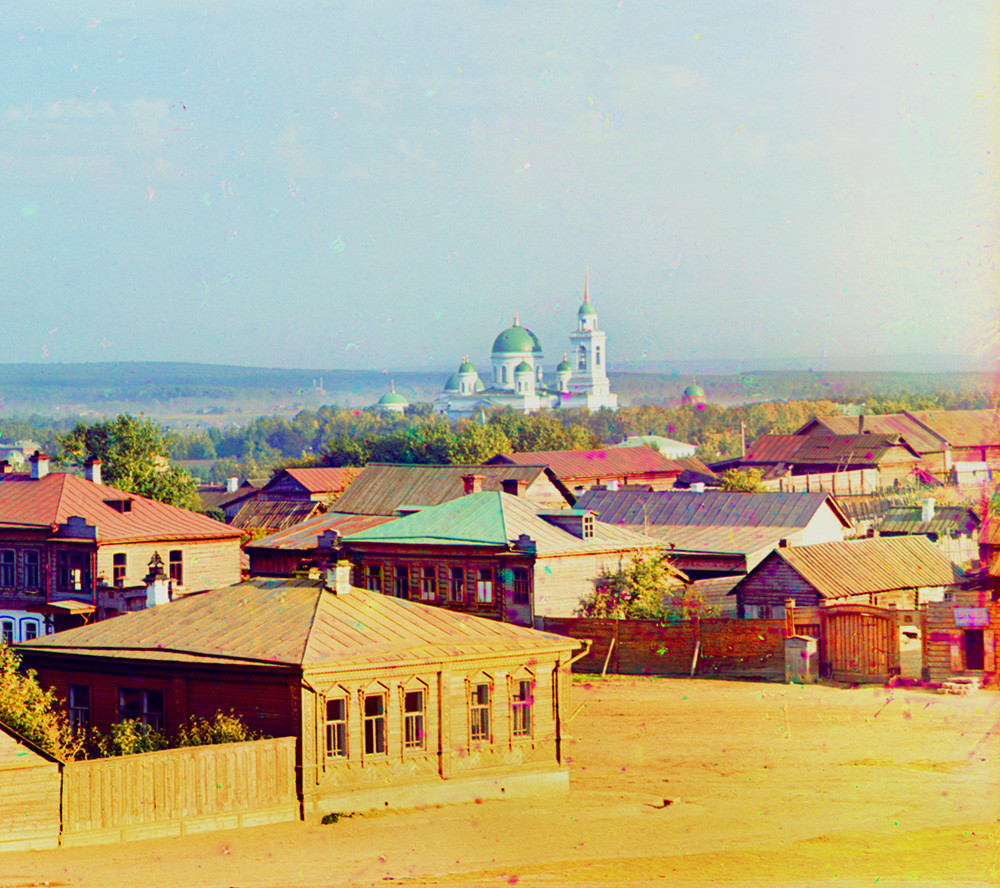 In 1909, the Russian chemist and photographer Sergei Prokudin-Gorsky visited Yekaterinburg as part of an expedition to the photograph the diversity of the people and places of the Ural Mountains. Traveling with the logistical support of the Ministry of Transportation, he took views ranging from wild nature to large factories. 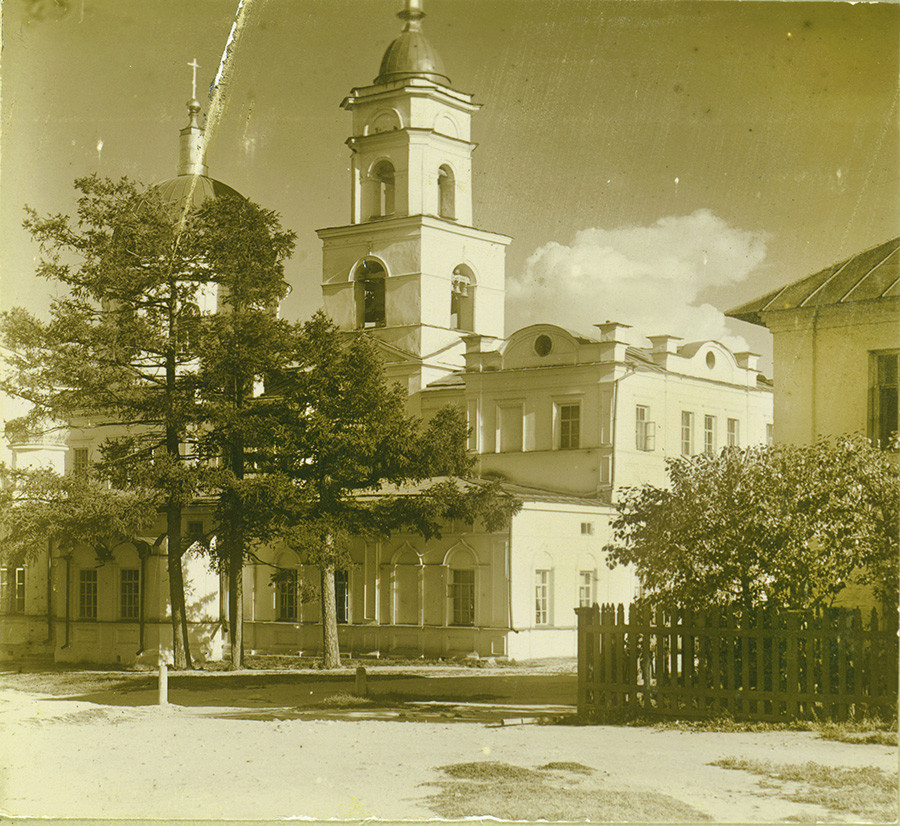 Known during the Soviet period as Sverdlovsk (from 1924 to 1991), this fourth-largest city in Russia has witnessed transformations that are especially vivid when compared with Prokudin-Gorsky’s photographs. He was careful to include one of the most important monastic institutions in the Urals territory, the convent with a dual dedication to the Tikhvin Icon of the Virgin and Prince Alexander Nevsky, the 13th-century Russian warrior saint. My first visit to the Alexander Nevsky-New Tikhvin Convent occurred nine decades later in late summer 1999, with a return trip in spring 2017.

Construction of the settlement at Yekaterinburg began in 1721 under the guidance of Vasily Tatishchev, who also played a pivotal role in the development of Perm. With Tatishchev’s direction and the technical assistance of Johann Blier, Yekaterinburg rapidly became an industrial center.

Work proceeded at an intensive pace, both for the factory buildings and for a large dam to contain the town’s reservoir and channel the waters of the Iset River to provide the energy for the factory works. The factory complex was enclosed within a large rectangular earthen rampart measuring 2,400 by 2,100 feet. Construction labor for this massive fortification was provided by 2,000 peasants and 1,000 soldiers. 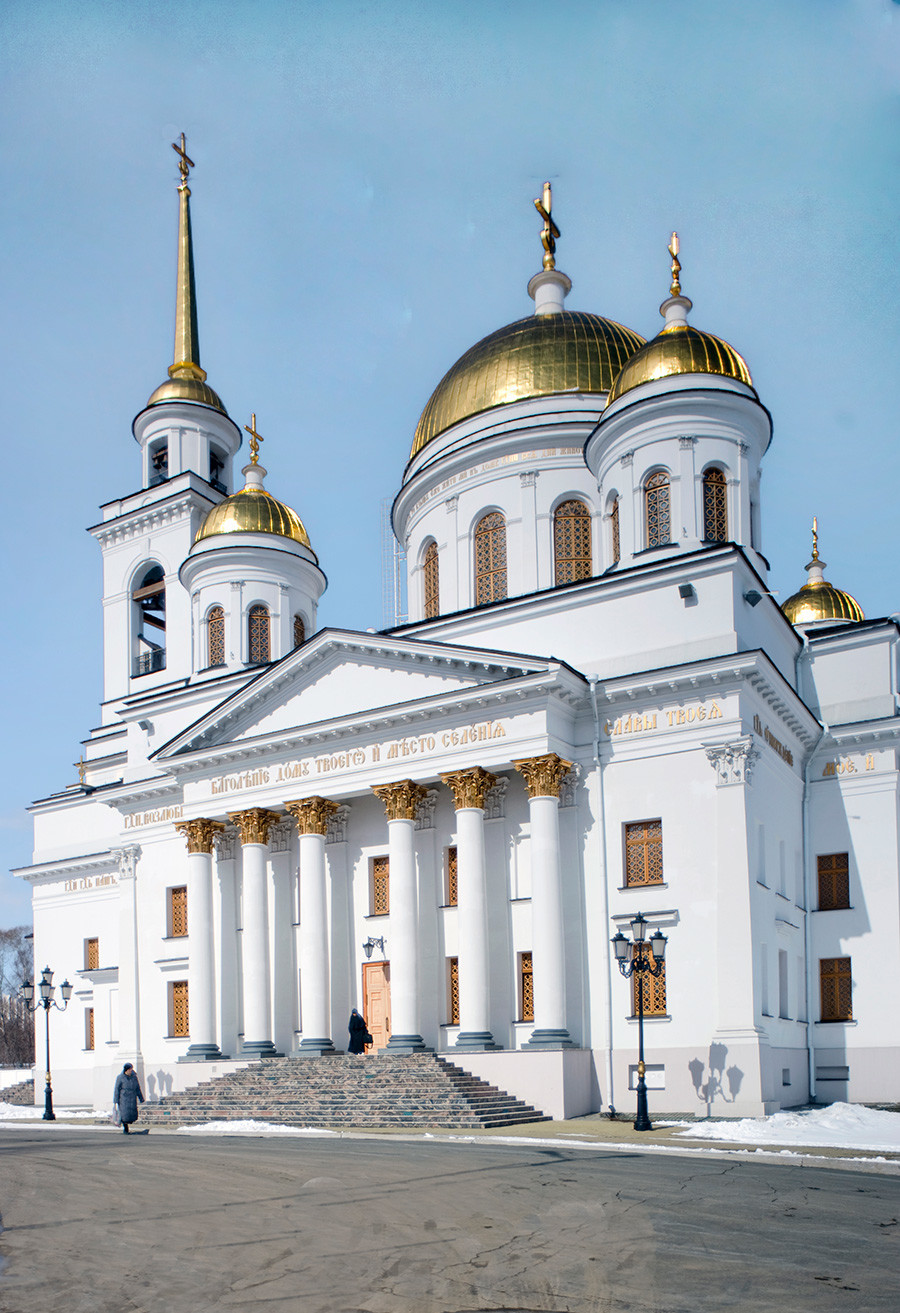 Tatishchev was removed from supervision of these state factories at the end of 1722 because of a feud with the Demidovs, who held a near monopoly on supplies to the state. Nonetheless, work continued at the Yekaterinburg factory complex under the management of Wilhelm Gennin. Production at the first State Metals Factory on the Iset River began in 1723, and three years later, the settlement was named in honor of Empress Catherine I, Peter the Great’s second wife, who after his death reigned briefly between 1725 and 1727.

In addition to the production and working of iron, other industrial enterprises included a branch of the State Mint in 1735. Subsequently in the 18th century, Yekaterinburg gained renown as a center for ornamental objects from semi-precious Urals stones, such as jasper, porphyry, malachite – the most impressive of which can be seen at the Hermitage Museum in St. Petersburg. 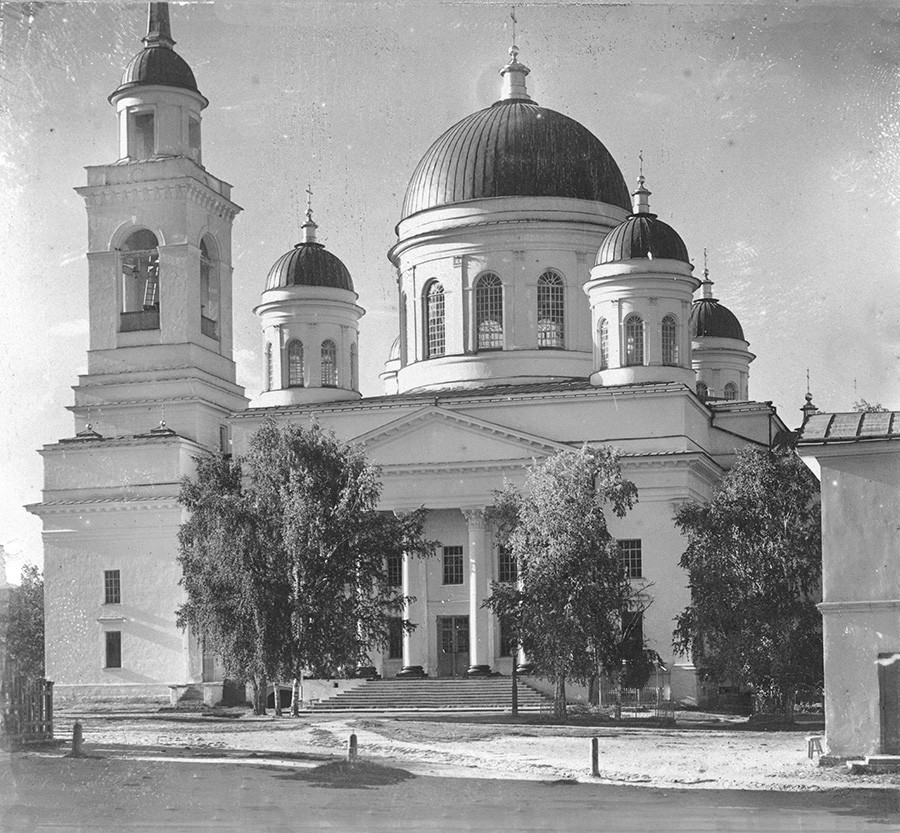 With the extension of the Moscow Road through Yekaterinburg in 1763, the factory town also flourished as a transportation center despite its considerable distance from a large river. A further stimulus to growth came with the discovery of gold in the nearby village of Beryozovskoe in 1745, an event that launched large-scale gold extraction in Russia. 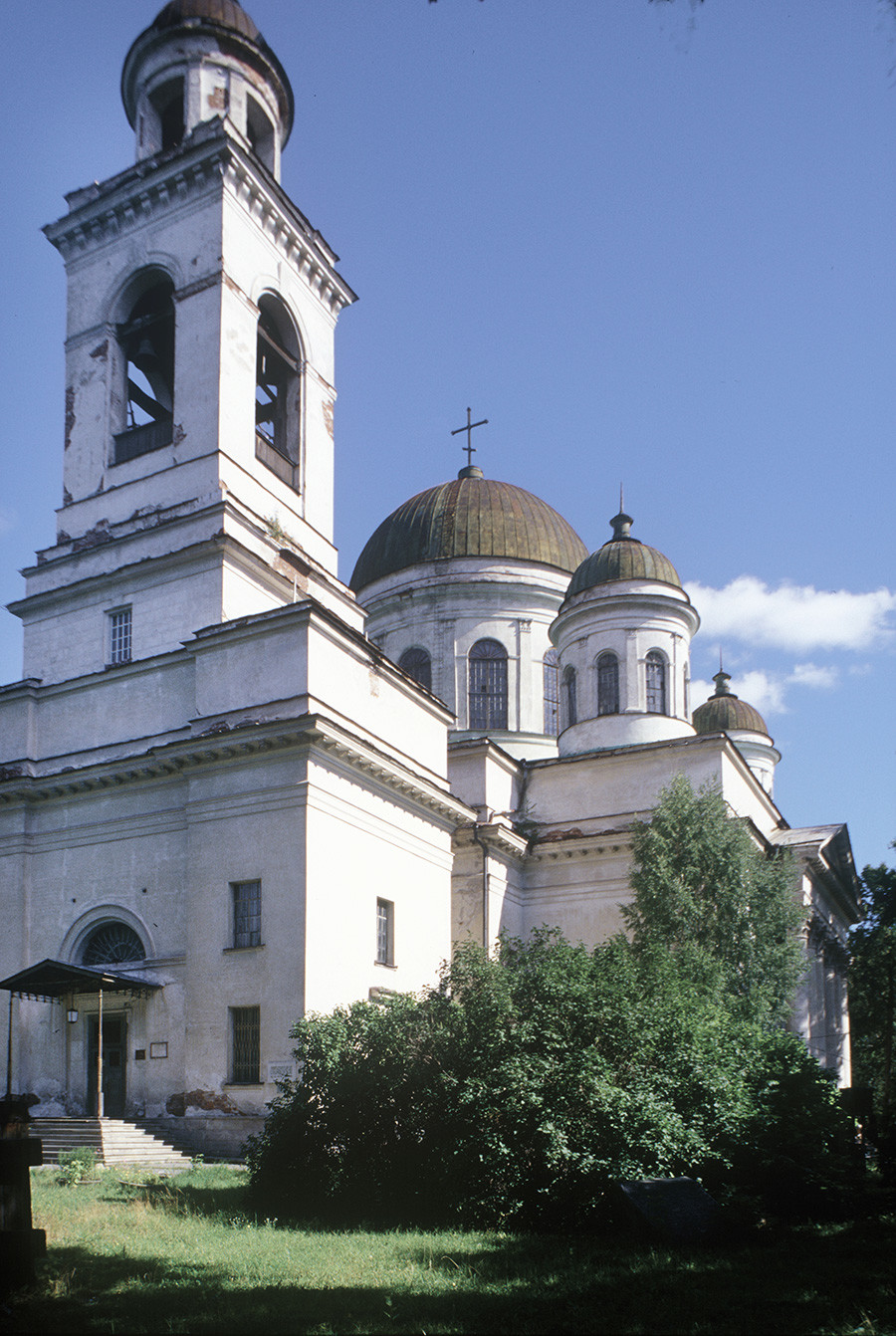 For all its significance as a mining, industrial, and transportation center, Yekaterinburg did not receive the status of town until 1781, when it also became the center of the new Yekaterinburg province, part of a larger territory administered from Perm. Only in 1804 was the first general plan of the town given official approval, although the process of drafting one had begun in the 1780s.

Nonetheless, the importance of Yekaterinburg in the latter part of the 18th century was confirmed by the construction of masonry churches in a largely wooden town. Among them was the Church of the Dormition, consecrated in 1782 as a cemetery church and built with funds from a local merchant whose wife was buried nearby. The following year a chapel dedicated to the Tikhvin Icon of the Virgin was added to the south façade. 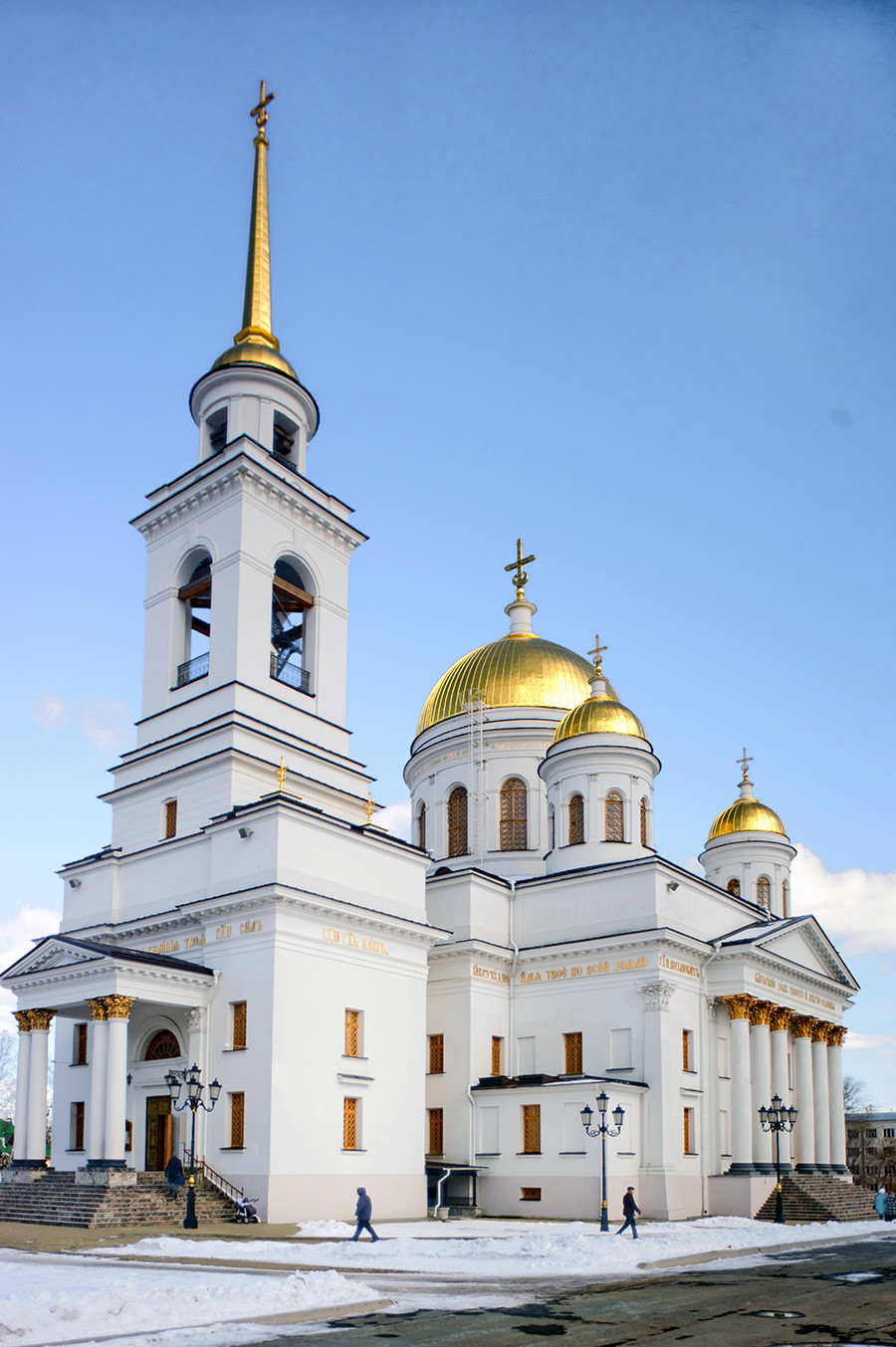 An almshouse founded at the church in 1796 was converted to an Orthodox refuge for women in 1799 on the initiative of Sister Tatyana (Mitrofanova), whose husband had disappeared in military service. At the same time local merchants began gathering funds to erect a church dedicated to Tsar Alexander I. With their support in 1807 she journeyed with another sister to distant St. Petersburg, where she petitioned Tsar Alexander and the Holy Synod of the Orthodox Church to elevate the commune to the status of convent. 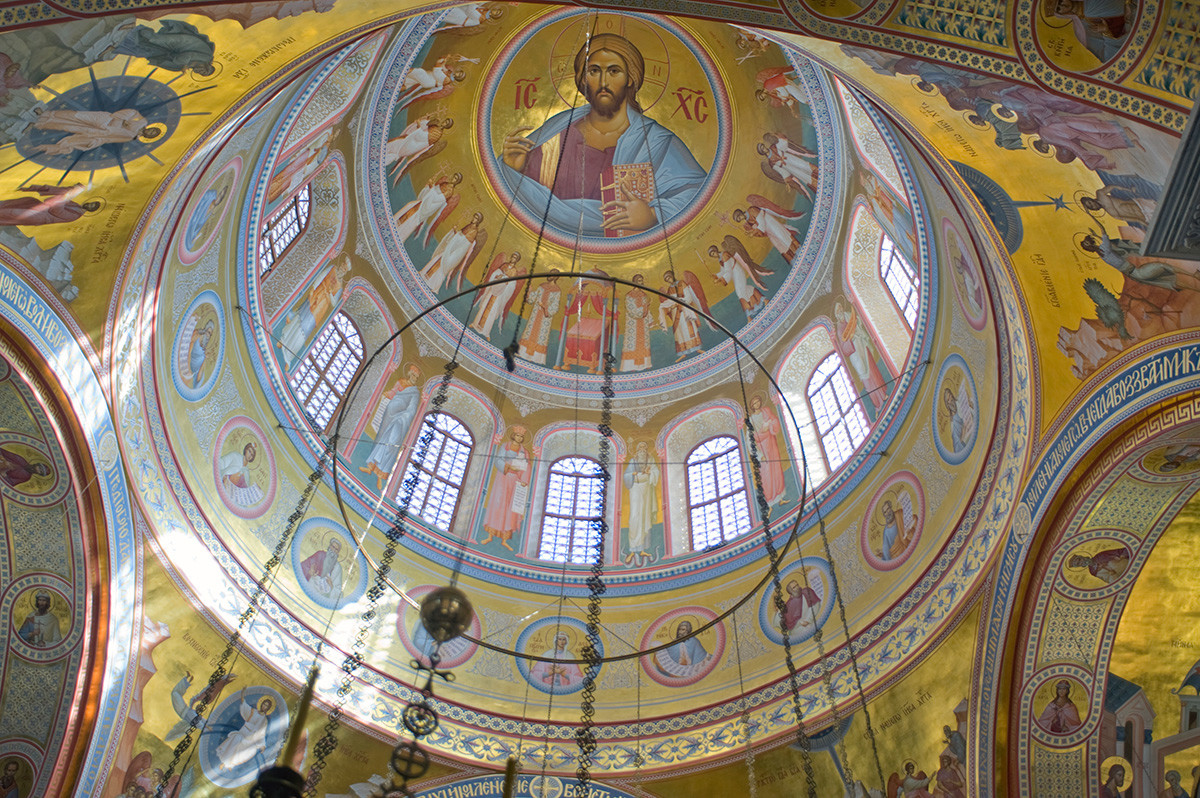 Upon final approval in late 1809, the New Convent of the Tikhvin Icon came into being. At the same time, Tatyana entered the Resurrection Convent in St. Petersburg, where she was tonsured in 1811 under the name Taisiya. Upon returning to Yekaterinburg, Taisiya became the first abbess of the Tikhvin Convent, which flourished over the following decades until becoming one of the largest in Russia by the time of Prokudin-Gorsky’s visit.

The convent’s preeminent status was acknowledged when Alexander I prayed at the Dormition Church during his visit to Perm in October 1824 – part of an unprecedented journey through the Russian provinces by a reigning monarch. 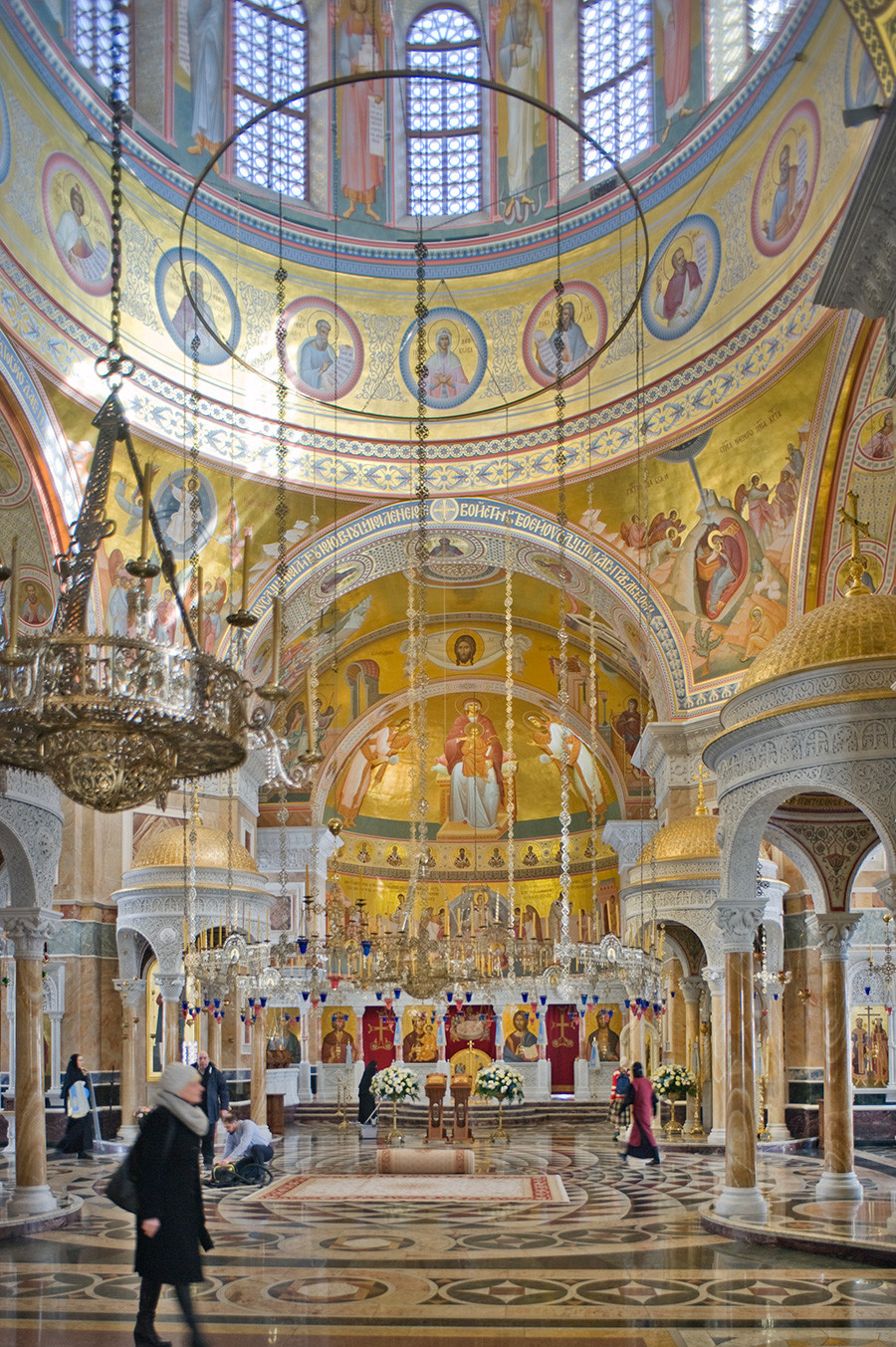 Although its 18th-century core remained, the Dormition Church had been extensively modified by the time that Prokudin-Gorsky photographed it. Much disfigured by the destruction of its cupolas and bell tower during the Soviet period, the building was converted to a military hospital. Returned to the convent in 2011, it continued to stand in a state of disrepair until its demolition in 2017. (During my 1999 visit, the crippled structure was barely noticeable behind dense foliage.) A reproduction of the church now stands on the site.

Church dedicated to a warrier saint

The central shrine is the Cathedral of St. Alexander Nevsky. With the granting of official status to the convent through the benevolence of Alexander I, the idea of building the convent’s main shrine in honor of the warrior saint gained impetus. When construction began in 1814, the church was also seen as a memorial to Russian sacrifices in the War of 1812.

Work proceeded slowly over the next two decades, and ominous cracks appeared in the walls. The two-story structure was razed, and in 1838 construction resumed with a larger, grander design that has been attributed to Ludovic Charlemagne II and David Visconti, both master builders in Saint Petersburg. Construction, which lasted from 1838-52 was supervised by Mikhail Malakhov, the official regional architect, who created other major neoclassical buildings in Yekaterinburg.

The cathedral’s form followed that of late neoclassical churches in St. Petersburg: a massive cube with a central dome and four flanking domes at the corners. The addition of a bell tower to the west front completed the ensemble. 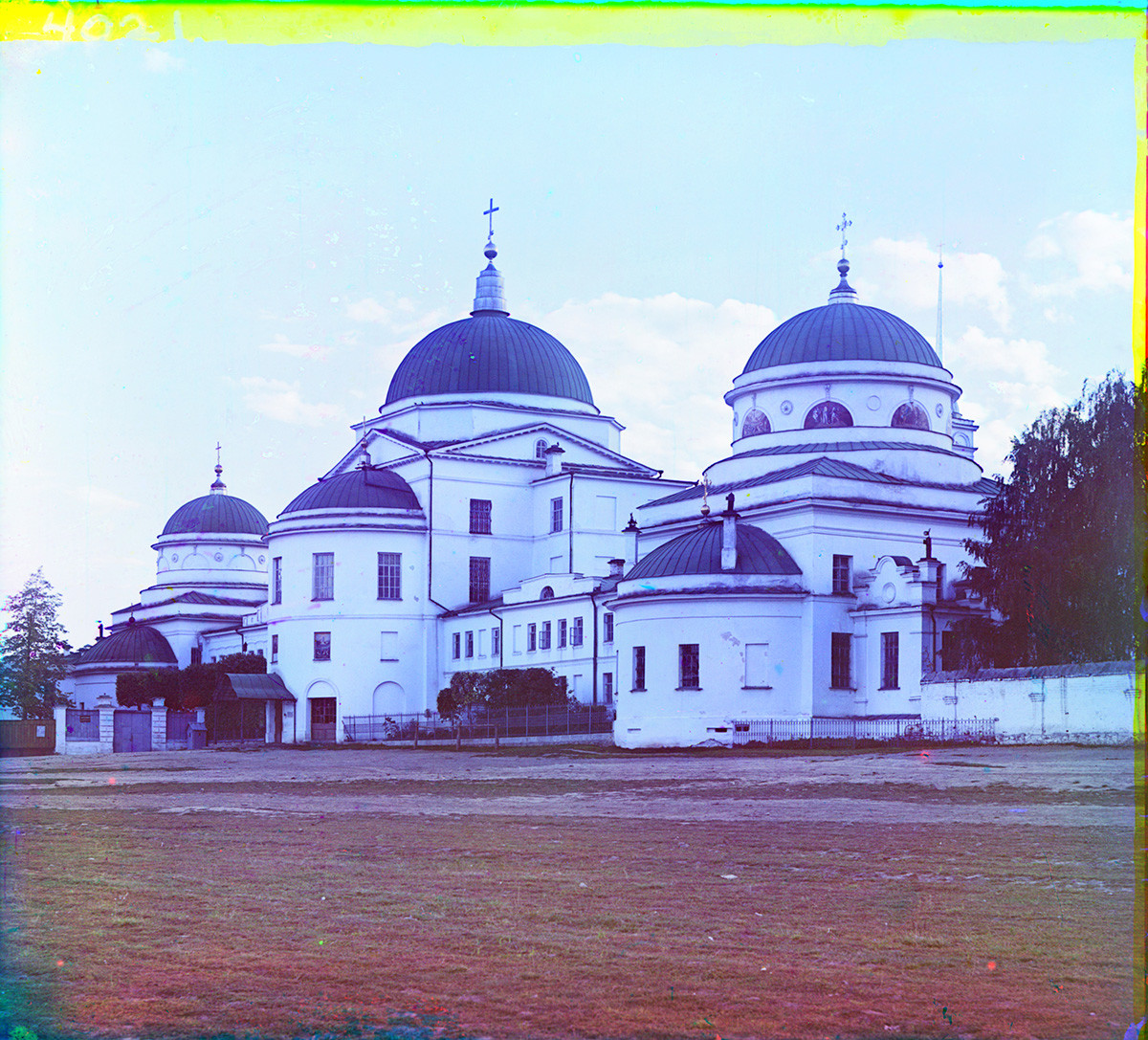 New Tikhvin Convent, east wall, northeast view. From left: Church of St. Feodosy of Totma, Gate Church of Presentation, Church of Icon of the Virgin “Comfort to All who Grieve”. Summer 1909

The cathedral interior was covered with academic-style wall paintings. Unfortunately, they have not survived. The convent was liquidated in the early 1920s, although the cathedral continued to serve the local parish until 1930, by which time much of the convent territory had been transferred to the military. The cathedral was used as a warehouse until 1961, when it became a museum.

The New Tikhvin Convent was resurrected by the Orthodox Church in 1994, but the process of restoration would take many years. The priority was the cathedral, whose restoration began in 2006. The repainting of the interior in a Middle Byzantine fresco style was particularly demanding and required the services of 60 icon painters with dozens of assistants. The frame of the new icon screen is composed of white and rose Italian marble. The results of the interior restoration are visible in my photographs from April 2017 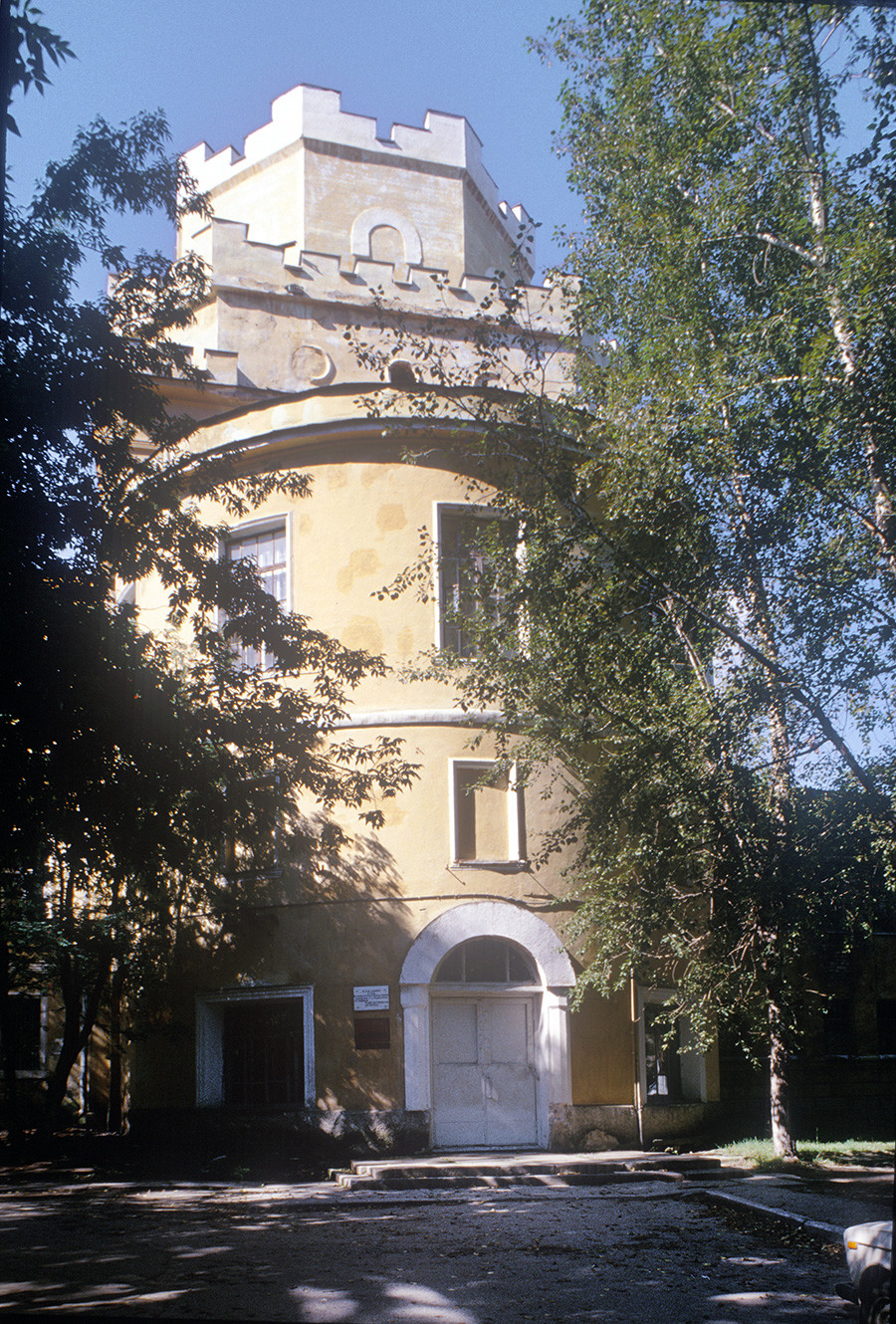 The restored Cathedral of St. Alexander Nevsky was consecrated on May 19, 2013 in a solemn ceremony by Patriarch Kirill. In honor of the transformation, the monastic ensemble was designated the Alexander Nevsky-New Tikhvin Convent.

Also in the process of restoration are other churches of the convent erected in the first half of the 19th century at the east wall. They include the Church of the Icon of the Virgin “Comfort to all who Grieve”; the Church of the Presentation of the Virgin, located over the Holy Gate in the east wall; and the Church of St. Feodosy of Totma. All were built in an austere neoclassical style. Fortunately, the original glass negative of Prokudin-Gorsky’s evocative photograph of these churches in evening light is in the Library of Congress collection. 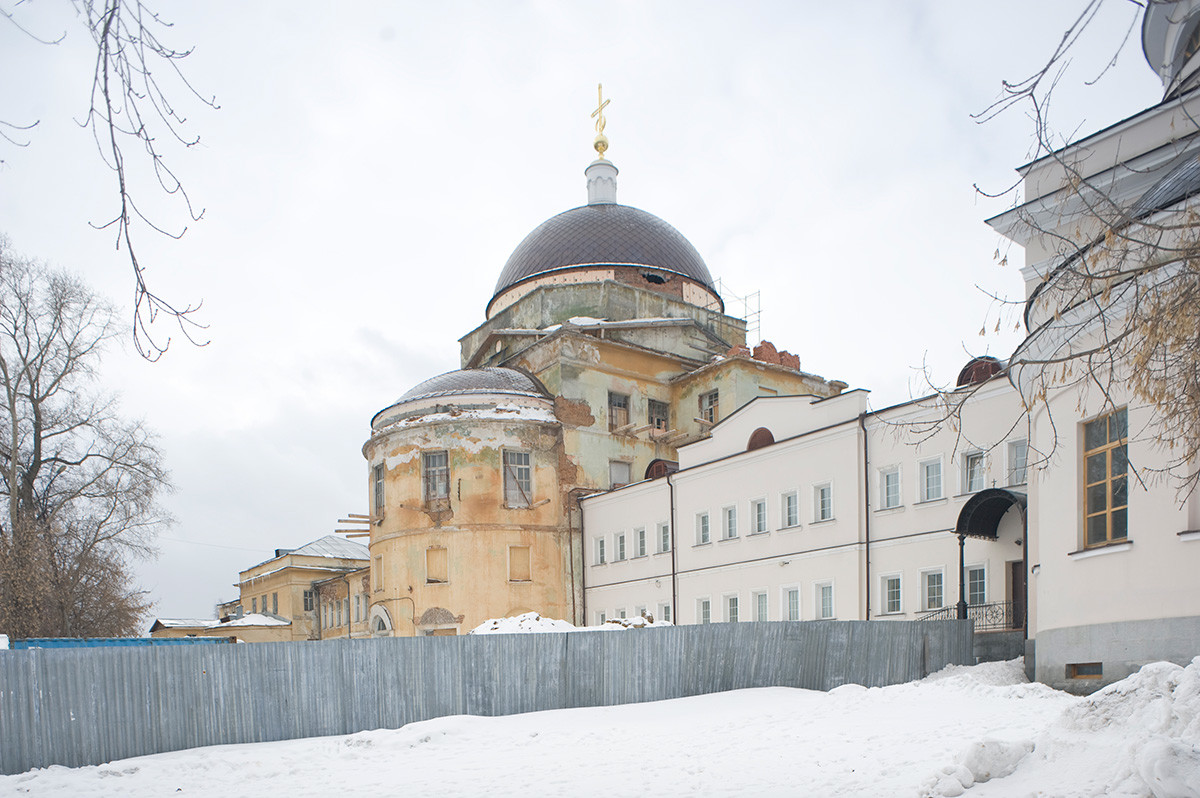 New Tikhvin Convent. Church of Presentation, northeast view (under restoration). Left: Church of St. Feodosy of Totma (without dome; not restored). Right: apse of Church of Icon of the Virgin. April 3, 2017

Less than a decade from the time of Prokudin-Gorsky’s visit, the fate of the New Tikhvin Convent intersected with that of his august patron, Emperor Nicholas II. In late April and May 1918, Nicholas, his wife Alexandra, their children and a small group of faithful retainers were transferred from Tobolsk in Siberia to the Ipatiev house in Yekaterinburg.

Although the group was held in strict isolation on military rations, two nuns from the convent were permitted to bring fresh food from June until the massacre of the royal group on the night of July 16/17, 1918. It is said that little of the food made it past the numerous guards posted around the Ipatiev house.

Beautiful and informative though they are, Prokudin-Gorsky’s photographs of the convent and of Yekaterinburg now seem a spectral presence hovering above the violent upheaval at the end of the Romanov dynasty. 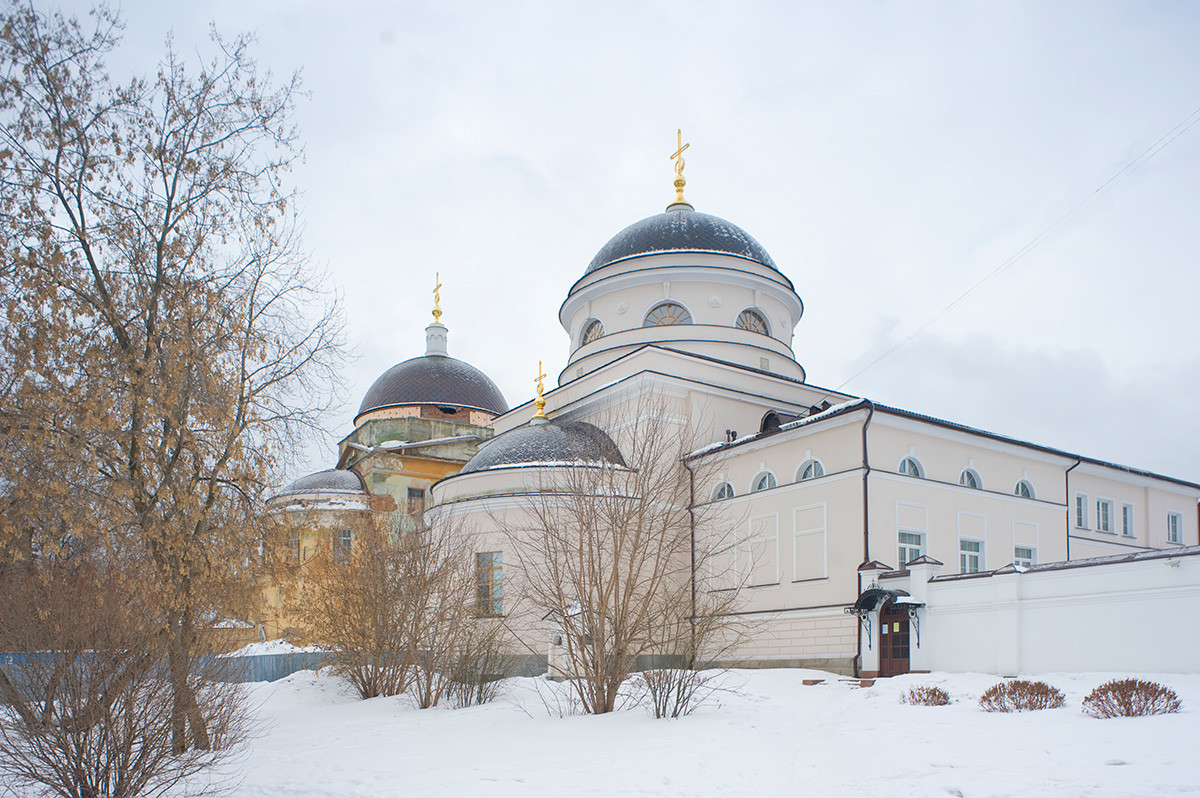 New Tikhvin Convent. Church of Icon of the Virgin “Comfort to All who Grieve”, northeast view. Left: Church of Presentation. April 3, 2017

In the early 20th century the Russian photographer Sergei Prokudin-Gorsky devised a complex process for color photography. Between 1903 and 1916 he traveled through the Russian Empire and took over 2,000 photographs with the process, which involved three exposures on a glass plate. In August 1918, he left Russia and ultimately resettled in France with a large part of his collection of glass negatives. After his death in Paris in 1944, his heirs sold the collection to the Library of Congress. In the early 21st century the Library digitized the Prokudin-Gorsky Collection and made it freely available to the global public. A number of Russian websites now have versions of the collection. In 1986 the architectural historian and photographer William Brumfield organized the first exhibit of Prokudin-Gorsky photographs at the Library of Congress. Over a period of work in Russia beginning in 1970, Brumfield has photographed most of the sites visited by Prokudin-Gorsky. This series of articles will juxtapose Prokudin-Gorsky’s views of architectural monuments with photographs taken by Brumfield decades later.

At TOP platform you are going to find a wide variety of ebooks to choose from and this makes it a great spot to look at ebooks. Here you can find a wide collection that hosts ebooks that you might not be able to find anywhere else. When you take the time to sort through TOP platform and see what ebooks are here then you truly might be surprised to see what original titles they are hosting for sale.