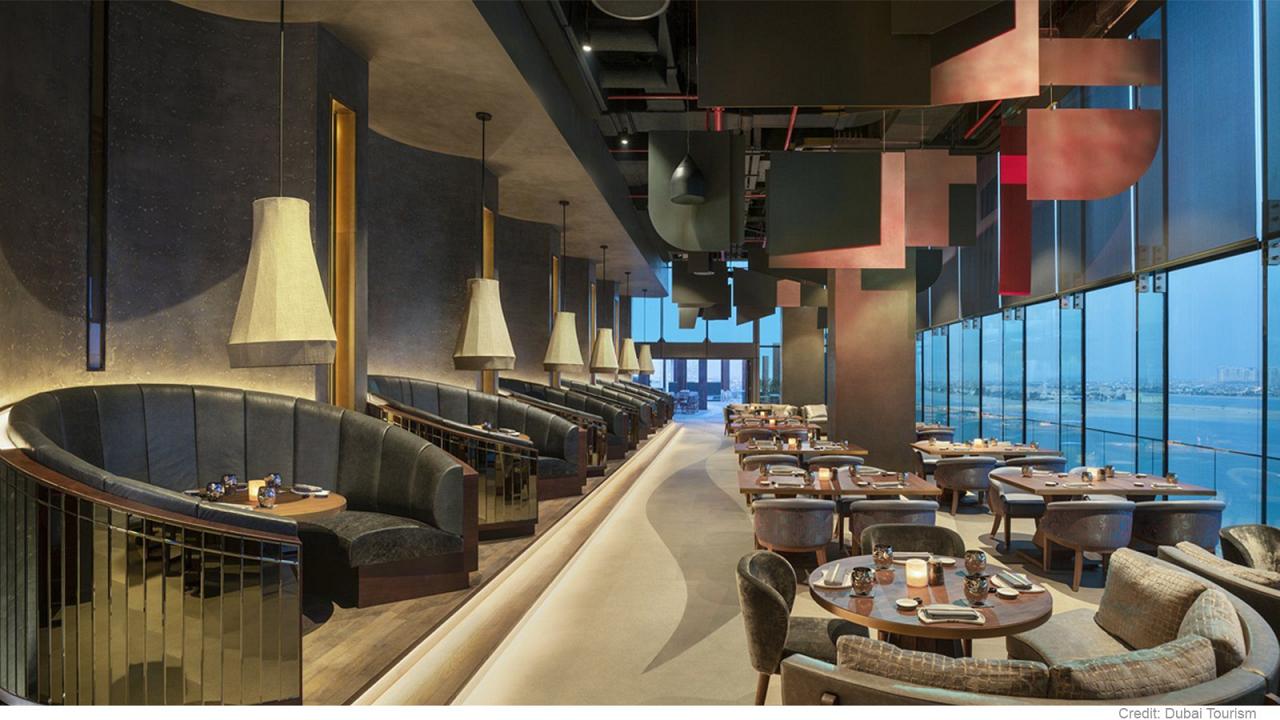 Why celebrity chefs flock to Dubai

The Middle East has yet to get a Michelin guide, but that hasn’t stopped Michelin-lauded chefs from around the world from flocking here to open iterations of their famed restaurants. Here is a list of the best and most talked-about eateries that could – eventually – be in line to win a star of their own.

Michelin’s second-most decorated chef of all time is no stranger to extravagance, yet he only opened his first UAE restaurant in early 2019. The Frenchman, whose Au Plaza Athénée in Paris was placed 16th on the latest World’s 50 Best Restaurants list, launched the three-level miX by Alain Ducasse at the Emerald Palace Kempinski Dubai, the interiors of which feature a 20 metre-high gold Fabergé egg. The menu focuses on seasonal produce and combines a range of culinary influences, including from the Middle East, Asia and South American, merged with the Monégasque chef’s French heritage.

In late 2018, TV chef Gordon Ramsay opened his second Dubai restaurant at Caesars Palace Bluewaters Dubai. Recreating the same show-stopping theatre and top-notch cooking of great British cuisine as seen at its original Las Vegas branch, the Emirates’ version of Hell’s Kitchen, inspired by Ramsay’s reality TV show of the same name, has been attracting a steady stream of discerning diners ever since it opened. The British chef, famed for his fiery outbursts, is also behind the few London eateries to win three Michelin stars, with his restaurants winning a total of 16 stars over the years.

British chef Jason Atherton worked for Gordon Ramsay Holdings for nearly a decade before opening his own restaurant company and flagship restaurant, Pollen Street Social, back in 2011. The London restaurant was awarded a Michelin star within just six months of opening, and the chef-restaurateur has since gone on to launch well-received eateries across London and another Michelin-starred spot in New York, as well as outlets in Shanghai, Doha, St Moritz and Dubai. Marina Social is particularly special, however, because of its gorgeous location. From the terrace, diners can overlook the glittering Dubai Marina, while enjoying Mediterranean-influenced dishes and drinks from the extensive cocktail list and wine cellar, which is a centrepiece of the contemporary restaurant. There are regular and vegan à la carte menus, as well as the option to choose a chef’s selection of four, six or eight courses with wine pairing. One must-try is the starter of goat’s cheese churros smothered in truffle honey. The sourdough pizzas here are particular popular too.

The man behind Modena’s three Michelin-starred Osteria Francescana, which has been voted the best restaurant in the world, opened his first spot outside of Italy early in 2019. Called Torno Subito, it’s located at the newly launched W Dubai – The Palm and offers a casual Riveria-style atmosphere with whimsical, brightly coloured interiors and beachside seating. The menu features all the classics: burrata, vongole, slow-cooked sea bass, pizza, tiramisu and gelato – to name a few. It’s more upbeat and down to earth than Bottura’s original claim to fame, but Torno Subito offers something entirely different that’s well suited to the bold, modern hotel it calls home.

Rihanna wore a T-shirt with his face on it. That’s how famous the chef behind this chain of steakhouses is. Nusret Gökçe, known globally as Salt Bae, is the Turkish butcher, chef and restaurateur who’s best known for his unique way of preparing and seasoning meat. He became an internet sensation and inspiration for countless memes a few years back and now every celebrity worth their salt dines at Nusr-Et while in Dubai – from footballers to Bollywood stars and high-profile politicians – and the man himself will often pop by for a selfie. The restaurant is based in the Four Seasons Resort Dubai at Jumeirah Beach and the focus here is well and truly on high-quality meat that’s been cooked – and, of course, seasoned – to perfection. All manner of steaks, from Tomahawk to filet mignon, are served, but there are other options too. These include lamb tenderloin, asado short ribs roasted for eight hours, home-smoked organic salmon and giant prawns. There are also souvenirs on sale, including a T-shirt just like Rihanna’s. Be warned: this is no place for vegetarians.

Japanese cuisine with a Korean twist is what snowboarder-turned-chef Akira Back is known for – not to mention his appearance on Iron Chef America – and what he’s brought to the Middle East for the first time with his eponymous restaurant at W Dubai – The Palm. His Michelin-starred restaurant, Dosa, is based in his hometown of Seoul, South Korea, but he has notable eateries across the world, from Las Vegas to Toronto and Jakarta to Hanoi. His Dubai restaurant has been very well regarded since it opened earlier this year, for its sophisticated ambience, fabulous food and stunning skyline views. It’s also popular among the vegan community, thanks to the abundance of plant-based options. The rooftop terrace, with its floating bar, is a particularly great spot to grab a table, weather permitting.

Portuguese chef José Avillez is behind Lisbon’s first two Michelin-starred restaurant, Belcanto, and he’s recently made his UAE debut with Tasca, at the brand new Mandarin Oriental Jumeira. Tasca is the word for a casual restaurant in Portugal – similar to “bistro” in France – so don’t expect a formal, fine-dining experience. Instead, Avillez’s first international restaurant offers fantastic sea views, a laidback atmosphere and dishes rooted in the chef’s hometown traditions but with a contemporary twist. It also boasts Dubai’s first Portuguese brunch.

If you want your online translation services to reach out to more and more clients around the world, then you should consider using The Online Publishers Top platform.