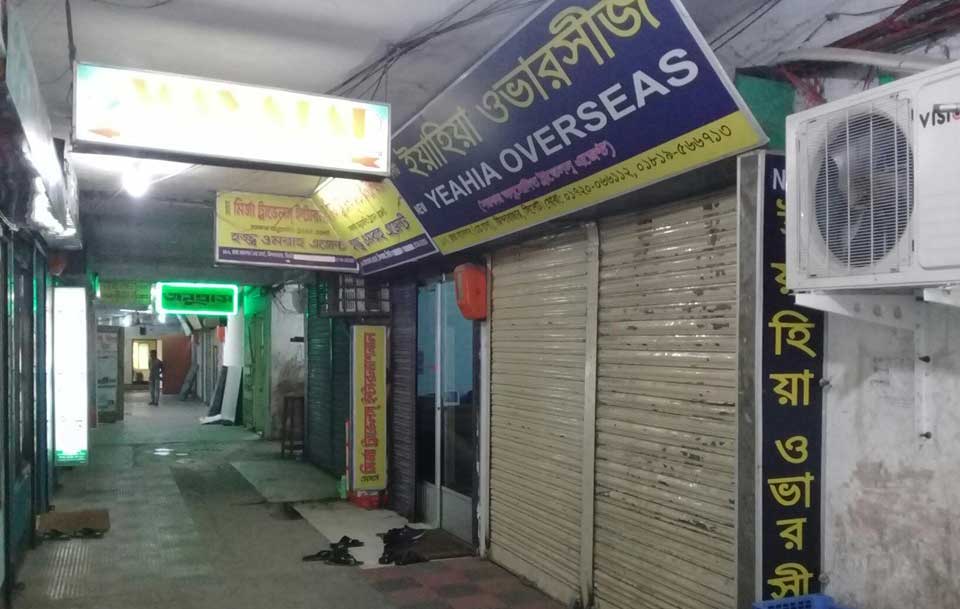 In light of the death of 37 Bangladeshis in a boat capsize in the Mediterranean Sea, sources in the Association of Travel Agents of Bangladesh (ATAB) has said that at least 88 illegal travel agencies, based out of the Sylhet division, are involved in human trafficking.

Of these unregistered and illegal agencies, 76 operate out of the Sylhet district and 12 in the Moulvibazar district, said ATAB’s Sylhet region chapter President Abdul Jabbar Jalil.

“Recently, we identified them and handed over the list to the deputy commissioners (DC) of Sylhet and Moulvibazar for administrative action,” he said.

Jalil told Dhaka Tribune that there are around 200 active travel agencies in Sylhet region that have been approved by the Civil Aviation and Tourism Ministry.

“Apart from these, there are also at least 400-500 unregistered and illegal travel agencies. Of them, at least these 88 agencies are involved in human trafficking.”

The information has come to light after at least 65 migrants, majority of them being Bangladeshis, died when their boat capsized in the Mediterranean Sea off the Tunisian coast en route to Europe from Libya on Friday, the UN refugee agency UNHCR said.

However, the state-run Tunis Afrique Presse agency reported a death toll of at least 70 people, making it one of the deadliest shipwrecks involving migrants trying to reach Europe this year, reports Reuters.

So far, it has been confirmed that 37 of the deceased migrants were Bangladeshis, who were travelling to Europe in the search of a better life. Also, 14 out of 16 rescued were Bangladeshis too.

Six of the deceased were from Sylhet. Apart from them, another migrant from Sylhet is still missing, while three others are among the rescued.

ATAB leader Jalil said many illegal travel agencies have set up shop in various markets in Sylhet and are involved in trafficking humans to different countries. “Some of these agencies also give workers hundred percent assurance of illegal passage.

“Names of these agencies were also sent to the concerned ministry earlier several times seeking action.”

Yeahia Overseas, owned by Enam Ahmed and housed in the Raza Mansion market, is one of these agencies involved in illegal human trafficking.

Even though it has licence to operate as a travel agency, Yeahia Overseas was not given ATAB membership as there are human trafficking allegations against it, said Jalil.

“We prioritise natures of business and characteristics of an agency and its owner, not just the licence,” he added.

According to the families, three of the six deceased from Sylhet had gone to Libya through Yeahia Overseas.

Agency owner Enam has gone into hiding since the boat capsized on Friday. He was also unavailable on phone.

The other three deceased had left the country for Italy via Libya through a middleman named Saiful.

Saiful, who does not own any travel agency, has also gone underground after the incident. According to the locals and victim families, Saiful has been in this business for a long time.

He said the raids were supervised by the committee chief and Sylhet’s DC M Kazi Emdadul Islam. “Such raids will continue.”

A senior ATAB leader, who joined the raids, confirmed to Dhaka Tribune that the mobile courts sent 20 people to jail for different terms for their suspected involvement in human trafficking, apart from fining them.

“However, the owners of many illegal travel agencies have fled before the raids started,” he said.

The dead and the survivors

The six deceased from Sylhet have been identified as Ahsan Habib Shamim, and Kamran Ahmed Maruf of Moulvibazar, Abdul Aziz, Ahmed Hossain, and Liton of Fenchuganj, and Afzal Mahmud of Gopalganj.

The three survivors from the district have been identified as Bilal Ahmed of Fenchuganj, Shahed Ahmed Khan of Biyanibazar, and Masum Ahmed of Gopalganj. All of them were hospitalized after they were rescued.

Bilal is also the uncle of Aziz, Hossain and Liton.

The other migrant who is still missing till Monday is Ayaj Uddin of Fenchuganj.

Urging the authorities to return the bodies of the deceased, the families have demanded exemplary punishment of the agencies and middlemen who trafficked the youths illegally, instead of the promised legal and direct flights to Italy.

“Text, images, and video are the paint swatches of 21st-century artists — with a single catch: this form of art has to communicate, engage, and sell.” ― Laura Busche – Visit THE ONLINE PUBLISHERS for high quality content creation services and professional, artistic photography.

5 Great Services You Can Find With TOP Platform.

3 Reasons to Consider TOP for Any Press Release Project.

How to Design an Online Banner for Advertising.

4 Reasons All Photographers Need To Sign Up With TOP.

3 Reasons Top Is A Leader For Ebooks To Read.

3 Reasons To Advertise With TOP as Soon As Possible.

2 Main Reasons To Think About Going With TOP Translation Platform

3 Steps To Getting Great Online Reviews.

How to Find the Right Digital Marketing Agency.

Learn How to Get Positive Online Reviews.

Can Depression Increase the Risk of Dementia?.