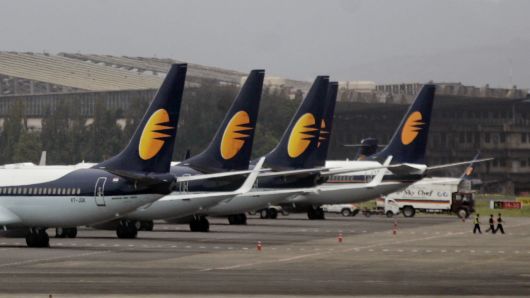 The debt-swamped Indian airline Jet Airways has canceled all of its international flights onr Friday.

According to its own website, flights scheduled to depart today from Delhi to Singapore, London, Amsterdam and Kathmandu have all been axed. Heathrow to Delhi and Mumbai services have also been canceled, according to the London airport’s website.

The airline has run out of cash, forcing pilots to go without salaries for months and causing failed payments to companies that lease aircraft, as well as defaults on other loans.

With aircraft leasing firms going unpaid, the number of planes operating under the Jet Airways name has collapsed. On Thursday local media reported that the airline had grounded ten more planes due to unpaid leasing fees and was now only operating 14 planes for international flights.

Illustrating the point, flight tracking website Flightradar24 has published a tweet showing the steady reduction in international services being offered by Jet Airways over the last 12 months.

In an emailed statement to CNBC, the public relations team for Jet Airways in the United Kingdom confirmed the cancellations between London and India for Friday. There was no indication if services would soon return to normal.

The statement said that the airline was working to minimize inconvenience to passengers and “in line with regulatory guidelines” was “offering re-accommodation choices or extending applicable refunds as the situation warrants.”

It added that at a corporate level, the airline’s management and key stakeholders were continuing to “work closely towards resolving the current situation.”

Estimates puts the carrier’s debt pile at more than $1 billion and in January it was revealed that it had defaulted on loans, including those to the government-owned State Bank of India (SBI).

In March the airline’s founder, Naresh Goyal, stepped down as chairman, handing majority control to a consortium of Indian lenders led by the SBI.

On Wednesday, the lenders extended a deadline for outside bidders to take a stake of up to 75% in the airline. Initial interest bidders have until the end of today with binding bids wanted in place by the end of April, according to a notice on the SBI Capital Markets website.

Middle East airline Etihad, which holds a 12% share in Jet Airways, has reportedly expressed an interest in upping its stake. Rules dictate that foreign entities can own no more than 49% of an Indian airline.

India’s Aviation Minister, Suresh Prabhu, took to Twitter to say he would “review issues related to Jet Airways” and take “necessary steps to minimise passenger inconvenience and ensure their safety”.

Jet Airways had its first flight in May 1993, operating primarily out of Mumbai. Its latest official figures put the number of employees at more than 17,000.

Domestically, it is now India’s third-largest private airline after IndiGo and Spice Jet, holding a 10% passenger market share during February 2019.